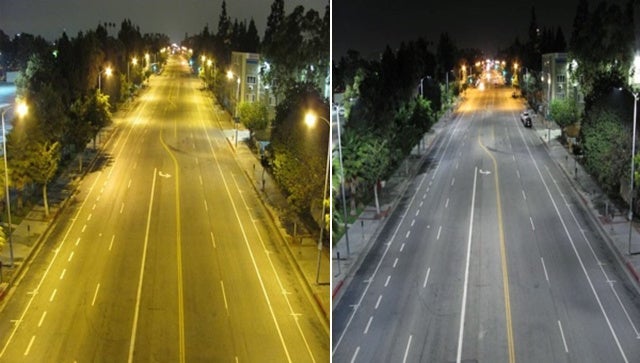 Before and after Los Angeles replaced their high-pressure sodium streetlights with LEDs. © COPYRIGHT 2015 CITY OF LOS ANGELES. ALL RIGHTS RESERVED.

No wonder, then, that cities nationwide are beginning to replace their streetlights with LEDs. However, many cities are missing out on the real opportunity with LED streetlights: smart controls and the potential for a networked city.

Most cities are aware of the benefits of LED streetlighting compared to their existing technologies. Although LED technology has been available for decades, it has only recently become cost competitive with other lighting technologies.

Most high pressure sodium streetlights, which rely on chemicals and wires that degrade over time, need to be replaced every 3-5 years. LED lights, which instead rely on computer chips and electronic parts, last four to six times longer and are less likely to unexpectedly fail. Most fixtures are guaranteed to last for 10 years or more by the manufacturer, but are expected to last for at least 20 years.

Additionally, since the old fixtures fail every few years, cities have to get rid of hundreds of lamps and ballasts that contain mercury and lead every year. LED fixtures are often 100 percent recyclable and don’t use toxic substances.

LED lights produce better color rendering and uniform illumination patterns as compared to high-pressure sodium fixtures. The white light emitted by LEDs, similar in color temperature to moonlight, shows colors as they really are, and provides better visibility for drivers, bicyclists and pedestrians. Generally speaking, LED lights use a special lens to direct the light, which reduces light pollution and improves the efficiency of the fixture.

Replacing streetlights with LEDs makes good fiscal and environmental sense. But simply replacing each streetlight with an LED only begins to tap the potential benefits of a comprehensive streetlighting retrofit.

How controls make a big difference

LEDs are operated by tiny computers. That means they can be individually controlled and networked together to share information back and forth with a central command center run by city staff.

Information also flows from the individual lights back to the central command. Generally speaking, cities have no way to find out if a light has failed other than by visual identification. In a networked system, every streetlight becomes part of an accurate inventory. If a light goes out, the central command knows that there’s a problem like a failed fixture, a power outage, or copper wire theft—and can dispatch a maintenance team to fix it.

Intriguingly, this network of streetlights can serve as the backbone for a number of exciting smart city technologies. For example, a city looking to implement an automatic meter reading (AMR) or advanced meter infrastructure (AMI) utility metering system can connect the meters to the same platform. Networked streetlights can also serve as a communication hub for a number of potential city services, such as municipal wireless, emergency vehicle or weather alerts, or traffic cameras.

Each streetlight will be equipped with a node that alerts the central network when it fails or no longer works as expected. These nodes communicate back to a central command center through a hybrid system of two technologies.

The first is a radio frequency (RF) signal that communicates to a small localized network of nearby lights. If one fails, the information is relayed via a “daisy chain” signal back to city staff.

The second is a signal sent over the power lines. This allows the city to rely on the existing infrastructure in place to communicate information and control the streetlights.

Using both technologies throughout the system enables the city to select the best technology for each specific streetlight. For example, hills or trees can block wireless communications between fixtures, so in those cases it may be better to communicate over the power line. In other circumstances, it’s easier to communicate wirelessly through RF signals. A flexible strategy like this is more cost-effective and less likely to fail than a single technology.

These controls alert the city when lights fail, relay the energy consumption of each streetlight and can dim the lights during low occupancy periods.

Controls help reduce maintenance costs. For example, with controls added, crews don’t have to hunt for outages, and can instead schedule maintenance of multiple nearby light outages together. This saves the time of maintenance professionals, as well as gas and truck costs.

Adding controls to an LED streetlighting upgrade can turn a smart investment into the backbone for a smart city.

Andrew Williamson is a Seattle-based account executive for McKinstry. He can be reached at andrewwi@McKinstry.com.